Below, I will detail the process I took in going from zero to hero.


1) Take an online course
It goes without saying that if you have close to zero knowledge on the subject at hand, some guidance to kick things off doesn’t hurt. I can wholeheartedly recommend the LinuxAcademy CKA, CKAD and Kubernetes the Hard Way courses. I found them to be very well structured and well worth the money. Take your time and make sure you know the material well. Redo the hands-on labs until you can recite them by heart. The $49,99 you pay per month is more than enough to help you pass both exams.


2) Take free practice exams
Once you’re done with the courses and know them like the back of your hand, step outside of your comfort zone and challenge yourself further. I’ve managed to find a few other practice exams that helped me a lot.

There’s a short one from the Kubernetes App Developer (CKAD) course from matthewpalmer.net that has a challenge which I found to be quite interesting.

Another free resource I found was the last point of the the Kubernetes certification course over at kodekloud.com. It’s a medium sized exercise that will walk you through many different aspects of k8s. I really enjoyed this one so I can highly recommend it.


3) Do free exercises
Now we get to the sauce. I found https://github.com/dgkanatsios/CKAD-exercises to be an amazing resource in checking your overall knowledge. They are very good exercises to go through, whether you are taking the CKA or the CKAD exam.
Additionally, https://github.com/wiewioras/k8s-labs is one amazing piece of exercise that I recommend to everyone.


4) Prep notes and tips
See https://github.com/twajr/ckad-prep-notes. Make sure to check the kubectl commands from the “core concepts”. They will save you a lot of time when creating resources and time is of the essence. With 24 questions and 3 hours for the CKA, that gives you 7.5 minutes per question. The CKAD is slightly more demanding with 19 questions and 2 hours, giving you an average of 6.3 minutes per question. Both exams are designed in such a way that you don’t have the luxury of spending time checking the docs; you really need to know what you’re doing.


And finally, here are my certs: 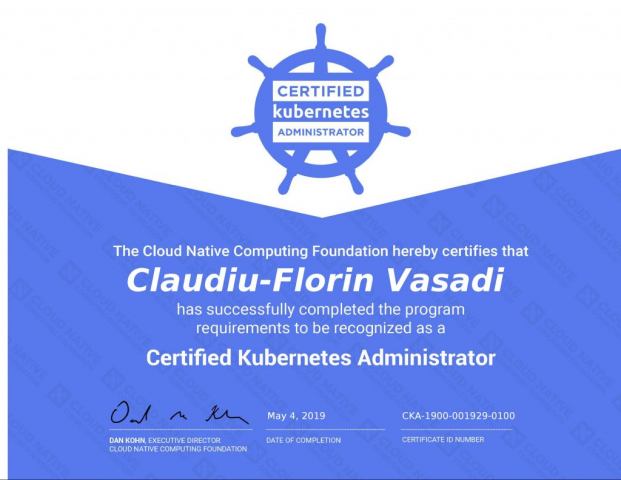 Last words:
Kubernetes is a new and cool technology. My take is that it will become the new cloud platform. It is without a shadow of a doubt, the most exciting technology I have seen in the last 10 years. I believe it will become a standard.

In this tutorial, we will demonstrate how easy it is to install OpenBSD on a software RAID1. The same principles can be applied to create RAID0,5 or more.

We have to drop to the shell since the installer does not have this functionality built in. Select “s” at the installer.

Check that we actually have more than 1x hdd:

By default, OpenBSD only creates one hdd. Run the following to manually create the second hdd:

Now initialize the MBR on both disks:

Create a label on both disks called “raid”. Dump it and restore to the second disk. Make sure to select “raid” for the “FS type“. Run the following:

Create the softraid(4) volume using the two “a” partitions. This will create a new drive called “sd0”. Run following:

where “-c” represents the RAID level and “-l” the chunk that will be used to create the RAID. These values can be adjusted to create other types of RAID arrays.

After this is done, exit the shell and proceed with the normal installation (just remember to select the new RAID drive “sd0” as the root disk).

And that’s it! Enjoy your software RAID OpenBSD system!